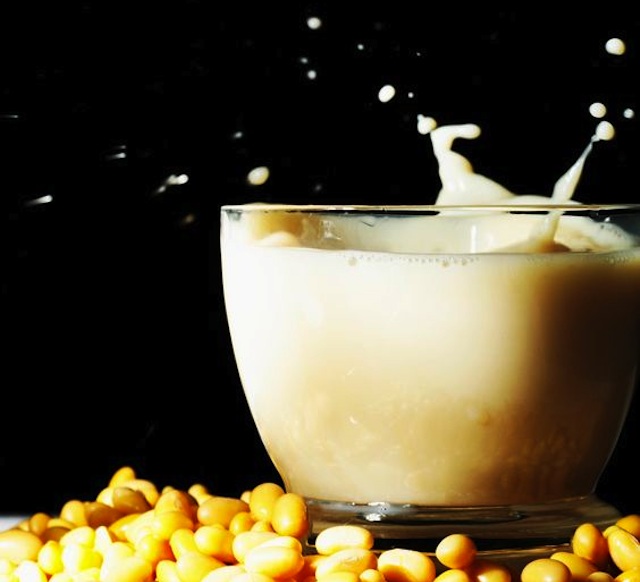 Many people turn to soya as, what they believe to be, a healthy alternative to meat and dairy.  However in recent years soya has had a lot of bad press, so we have decided to take a look ourselves into this contraversial legume.

Soya is a very cheap form of protein so it is used to bulk out many processed foods, approximately 60% of processed food contain GM soya. Lecithin is effectively soya oil and helps bind fat and water together, it is used in many baking products and comes under the label of vegetable oil.  Most animals for human consumption are fed on soya. Here are a few everyday foods that soya can be found in:

So is it good, or is it bad? The answer is not as straight forward as that.  Soya has advantages and disadvantages to health.

High in protien, fibre, vitamins (B1, B2, B6 & E) and isoflavines soya can be hailed as a way to lower cholesterol, protect against heart disease, prevent cancer and osteoperosis and help with menopausal symptoms.

It all sounds good, but, here is where the controversy comes into it. Soya contains phytoestrogens, phytic acid and trypsin inhibitors

Phytoestrogens– are a plant estrogen and can cause a range of health problems which include: thyroid problems, it can promote endometrial cancers in women, damage brain function and can cause fertility problems in men, it can cause thyroid disorders in both men and women. Some say that drinking 2 glasses of soya mik a day can substantially alter a woman’s menstrual cycle. Phytoestrogens can be particularly harmful to infants, and children given soya as a daily alternative to cows milk can potentially be ingesting more estrogen than the birth control pill. They are at risk of autoimmune thyroid disease, the onset of early puberty and developmental problems. Soya has also been linked with frequent colds, food intolerances, irritability and sugar cravings in children.

Phytic Acid– is found in nuts, seed and legumes, of which soya contains a large amount. Phytic acid binds to calcium, iron, magnesium and zinc, once bound these essential minerals can not be absorbed in the intestinal tract. This can contribute to food allergies and intolerances, promote kidney stones and weaken the immune system. Zinc is important in diabetes prevention and maintaining a healthy brain, nervous system and reproductive system.

Trypsin Inhibitors– when these are raw they block the enzyme trypsin which breaks down protein.  This disturbs our digestive system and prevents us from absorbing protein.

90% of soya is genetically modified and soya products are amongst the highest percentage of pesticide contaminated foods.  Also they have high levels of aluminium absorbed from the soil which is toxic to the nervous system, kidneys and the brain.

With all that said there may be a healthier way of using soya in our diets as there are two ways of using it, fermented and unfermented. Fermenting soya nutralises the phytic acid and phytoestrogens, it aids recolonising of the good bacteria in the large intestine which neutralises the bad bacteria, helping us to absorb food and neutrients more efficiently. So fermented, organic soya, in our opinion,  is the only healthy way to consume soya and in moderation at that.

Fermented soya comes in the form of miso, tempeh, natto and tamari sauce. In part 2 of How Healthy is Soya? we look at the different types of fermented soya and how to use them.

Prevention of injury while gardening…

Doing a spot go gardening this bank holiday weekend? Celcile tells us how to avoid…